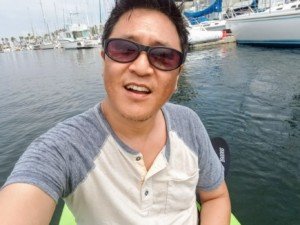 M
y mother once told me that I was drawing recognizable objects since I could hold a crayon. Even as a kid, I was fascinated with visual arts. There was something magical about affecting people and perceptions with images created entirely from scratch.

I started as a creative professional in 1993, working at GT Design & Graphics, a custom T-shirt shop in my hometown of Simi Valley, California. I was an illustrator and graphic designer in the small, four-person business. After a few years, I moved on to a graphic designer position at a national mail marketing firm of over a thousand employees in the San Fernando Valley. While creating promotional and packaging collateral as a senior designer, I was selected to attend a series of workshops with a marketing consultant, where I learned marketing tactics and best practices for persuasive design.

Some time later, a close friend started a new job in El Segundo. This was when we discovered the South Bay of Los Angeles. He moved to this area while we were in our twenties. We loved it. I also wanted to live in the South Bay. Eventually, I found my way into an online professional development company for teachers in El Segundo. As the only designer in the marketing department at this location, I was creating booklets, trade show displays, and banners, among many other things. When the company decided to consolidate the marketing department into their headquarters in the San Francisco area, a colleague told me about an opportunity to stay in the South Bay and work with her husband. For my interview with him, I had a portfolio and résumé ready for review. He barely looked, saying that his wife gave me a glowing recommendation. I was hired on the spot.

Formerly ComChoice (then Scope Seven, and now ZOO Digital), it was a DVD production house. I started in the Creative Services department with two other designers. Initially, we were designing static on-screen menus for DVDs, as well as occasional websites and marketing collateral for their varied clients. As the DVD industry evolved, I learned motion design and video editing, allowing the company to offer "motion menus" (on-screen menus with animated graphics and videos) to major film studios. The creative department grew along with the company, and I was later promoted to Art Director, overseeing a team of about fifteen graphic designers, motion designers, and production artists. While there, my South Bay friend had started an online poker strategy website, Flop Turn River. I initially helped with a new logo (and later, a wholly redesigned website). When they added a discussion forum later, due to my past experience as a forum administrator of an online gaming clan, I was able to better organize their message board. With my managing the online community, the message forum grew from three to over 40,000 registered members in just a few short years.

In 2010, Facebook had introduced business pages and "social media" started getting buzz as a marketing platform. Small businesses were setting up their own Facebook pages, but they did not look professional, and most did not know how to take advantage of this new medium to grow their business. With my background, I knew that these were things I could do better. And so I started my own business, providing social media marketing with a keen eye for professional design. This is the story of how Media Cookery came to be, and our mission is simple. We build your brand while you build your business.